The Louisville suburb of Prospect KY is located in the far northeastern Jefferson and southwestern Oldham counties along the Ohio River. Prospect is one of the few cities that extends into two counties. Prospect is the ninth wealthiest place to live in Kentucky and was incorporated as a city in 1974.

Prospect is bordered by Oldham County to the northeast, the river to the 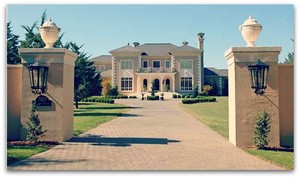 west and Harrods Creek area to the southwest. US Hwy 42 is the primary artery running through the area. In the late 19th century, Prospect was largely agricultural until the mid 1960s when large, high-end subdivisions were built; most notably Hunting Creek which included a golf course. Now some of the subdivisions include: Sutherland, Rivers Edge, Rivers Glen, Norton Commons, Glen Oaks, The Landings, Nevel Meade Estates, Bridgepointe, Fox Harbor, Spring Farm, Wolf Pen Woods.

Things to do in Prospect include waterfront dining, boating, sailing, shopping, picnicking, horseback riding and hiking - just to name a few!

There are also many beautiful Prospect neighborhoods near creeks and streams such as Harrods Creek Overlook, Harrods Landing, Ken Carla, Lazy Creek, The Landings, Smithfield Greene, The Harbor at Harrods Creek, The Woodlands and Timberlake. The Sutherland and Paramount Estates neighborhoods have pretty pond views.

LOOK at this Hunting Creek BEAUTY! This completely renovated modern ranch has it all! Upon entry you notice the beautiful living room with gas fireplace, and the GORGEOUS...

A superlative home in magnificent Hunting Creek! This is the one! Situated on a lovely, nearly one-acre lot, you will first behold the home's beyond-darling curb appeal. ...